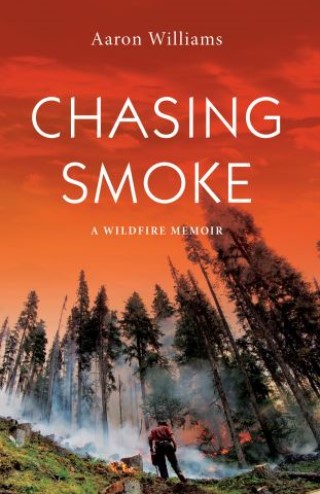 "At first I'm calm as the trees fall. But suddenly a rat's nest of wood, bent horizontal and cribbed into the trees above us, comes down in a rush of a hundred machine gun snaps. Trees caught in the nest flail around before hitting the ground. Our eyes dart everywhere, trying to keep track of every moment. Trees break free and swing themselves like catapults. Splintered chunks of wood slash through the air like propellers... Falling trees is the most dangerous job in North America."

British Columbia's weather and geography--hot dry summers, steep terrain, and population density in forested areas--make it one of the most difficult places in the world to fight forest fires.

Chasing Smoke is an enthralling insider-account of how a fire season unfolds. Experienced firefighter Aaron Williams offers a tangible window into the intensely physical, high-adrenalin lifestyle shared by his crew of eccentrics, all eager to be on the front line. Williams shares what it's like to work sixteen-hour days in an apocalyptic landscape, where the smoke is so thick your snot runs black and you need to drink ten litres of water a day. What it's like to make a stupid mistake and singe your beard in front of your crew, or spend hours hosing a spot the size of a queen mattress and still not extinguish the burn. What it's like to hear a tree fall, a co-worker's shout, and imagine the worst.

From the "curated gauntlet of abuse" that makes up rookie week, until the last length of hose is rolled up at the end of the burn season, Williams chronicles the seasonal existence of a firefighter, all while examining the wider world of firefighting--interweaving the history, mechanics and politics--as well as the micro-world of the small crew who willingly put their lives on the line.

Aaron Williams fought forest fires in British Columbia, Alberta, Ontario, Quebec and Idaho from 2006 until 2014. His writing has been published in newspapers such as The Globe and Mail, Halifax Chronicle Herald and the Vancouver Observer. He is currently working on an MFA in creative non-fiction writing at King's College in Halifax, NS.