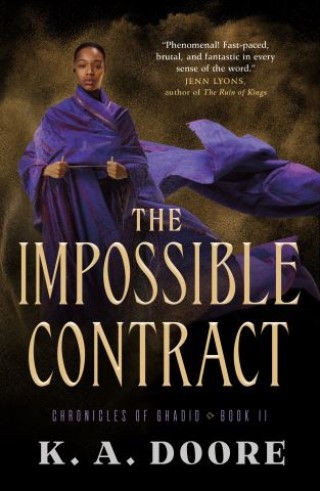 Book 2 in the Chronicles of Ghadid

The Impossible Contract is the second book in K. A. Doore's high fantasy adventure series the Chronicles of Ghadid, where a determined assassin travels to the heart of the Empire in pursuit of a powerful mark, for fans of Robin Hobb, Sarah J. Maas, and S. A. Chakraborty

An assassin’s reputation can mean life or death.

This holds especially true for Thana Basbowen, daughter of the legendary Serpent, who rules over Ghadid’s secret clan of assassins. When a top-tier contract drops in her lap — death orders against foreign ambassador Heru Sametket — Thana seizes the opportunity.

Yet she may be in over her head. Heru wields blasphemous powers against his enemies, and Thana isn’t the only person after his life: even the undead pursue him, leaving behind a trail of horror. Her mission leads her on a journey to the heart of a power-hungry empire, where dangers lurk around every corner. Her only ally is Mo, a determined healer set to protect Ghadid any way she can.

As further occult secrets are unleashed, however, the aftermath of this impossible contract may be more than anyone can handle.

The Chronicles of Ghadid
#1: The Perfect Assassin
#2: The Impossible Contract
#3: The Unconquered City

K. A. Doore: K. A. DOORE was born in Florida but has since lived in Washington, Arizona, and Germany. She has a BA in Classics and Foreign Languages and an enduring fascination with linguistics. These days she writes fantasy in mid-Michigan and develops online trainings for child welfare professionals. The Impossible Contract is the second novel in the Chronicles of Ghadid trilogy, following her debut The Perfect Assassin.