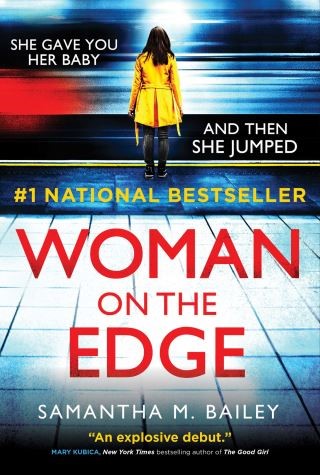 Woman on the Edge

A moment on the subway platform changes two women’s lives forever—a debut thriller that will take your breath away.

A total stranger on the subway platform whispers, “Take my baby.”

She places her child in your arms. She says your name.

In a split second, Morgan Kincaid’s life changes forever. She’s on her way home from work when a mother begs her to take her baby, then places the infant in her arms. Before Morgan can stop her, the distraught mother jumps in front of an oncoming train.

The police take Morgan in for questioning. She soon learns that the woman who jumped was Nicole Markham, prominent CEO of the athletic brand Breathe. She also learns that no witness can corroborate her version of events, which means she’s just become a murder suspect.

To prove her innocence, Morgan frantically retraces the last days of Nicole’s life. Was Nicole a new mother struggling with paranoia or was she in danger? When strange things start happening to Morgan, she suddenly realizes she might be in danger, too.

Woman on the Edge is a pulse-pounding, propulsive thriller about the lengths to which a woman will go to protect her baby—even if that means sacrificing her own life.

Samantha M. Bailey: Samantha M. Bailey is a Toronto-based novelist, journalist, and freelance editor. Her work has appeared in NOW Magazine, The Village Post, and Oxford University Press, among other publications. She was a writer-in-residence for Kobo Writing Life at BookExpo America 2013. She is the co-founder of BookBuzz, a promotional and interactive author-reader event held in New York City and Toronto. Woman on the Edge is her debut novel. Connect with her on Twitter @SBaileyBooks and on her website at SamanthaMBailey.com.