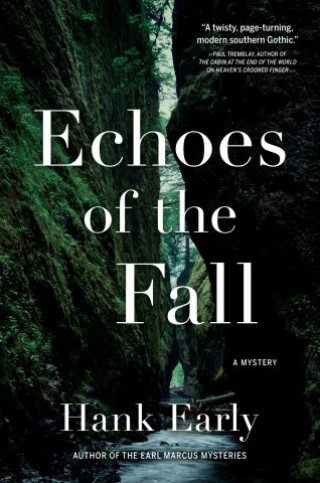 Echoes of the Fall

Earl Marcus has faced a litany of demons in his time, but a grisly murder sends him spiraling into a vortex of long-buried secrets.

After losing a hotly contested sheriff's race to the lackey of corrupt politician Jeb Walsh, Earl Marcus has had the worst summer of his life. But worst turns deadly when a body turns up on Earl's front lawn, accompanied by a cryptic letter.

Earl finds a cell phone in the victim's car and tracks it to The Harden School, an old, isolated campus surrounded by barbed wire and locked gates, and catches a sneak peek at a file labeled complaints, where he finds a familiar name: Jeb Walsh. Jeb's ex-wife Eleanor had lodged multiple complaints against the school on behalf of her son, and when he contacts Eleanor, the horrifying truth begins to emerge.

Desperate to make a connection between the school and the dead man, Earl journeys into a world where nothing is sacred.

Hank Early: Hank Early is a middle school teacher and writer located in Central Alabama. He enjoys good beer, strong coffee, and wild storms. He's married and has two kids who are constantly giving him ideas for his next novel. This is his third Earl Marcus mystery.